It Seems That There Is A New Version Of Kools Cigarettes

I didn't notice this before but the last time I blogged about being able to buy Kool cigarettes on sale for 2 packs for $6 - this was the version of Kools that I was talking about. This new version is called Kool XL and the difference is that they are wider (and the promotion says "smoother") than the regular Kool cigarettes are. 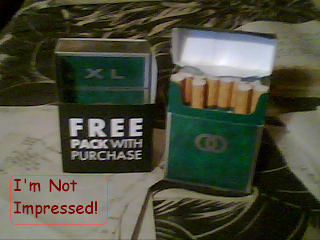 I'm guessing that the reason why they are on sale is because the company that makes them - RJ Reynolds Tobacco Company - wants to promote them more.

I don't know if I really taste a difference with this newer version of Kool cigarettes although it does seem that it takes a lesser amount of time to smoke a whole cigarette - maybe that's what they want?

I surely hope that this doesn't mean that they are going to get rid of their original version of Kools! Lots of times companies will come out with something that they think is better than the original and it really is not!

Comments:
In my personal opinion I really don't like this new version that they are promoting! I have had a chance to think about it (while I was talking to someone else about it) and have come to the conclusion that the company that makes this brand is just trying to sell a "cheaper" made product for the same amount of money!

Personally I'm going to stick with the ORIGINAL brand of Kools!